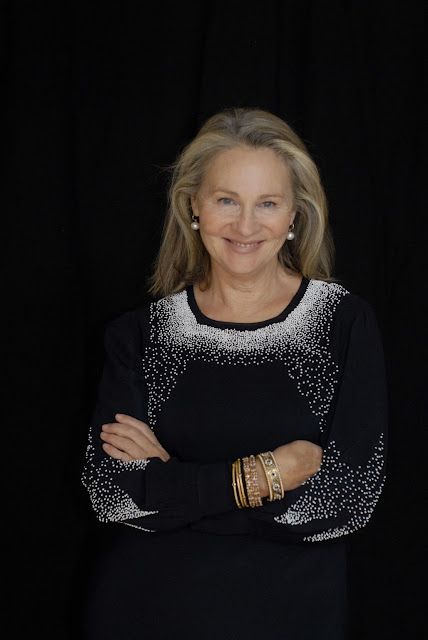 We were so excited to be able to chat with Vicki Archer, author of the books French Essence and My French Life and the popular blog French Essence! We would have been more excited if we were all together at her house in Saint Rémy de Provence but Skype had to suffice.

We chatted about Vicki's beautiful ex-pat life in France (she's Australian) and the beautiful farm house she restored over time. She even has 3000 olive trees and spends one month a year harvesting them! 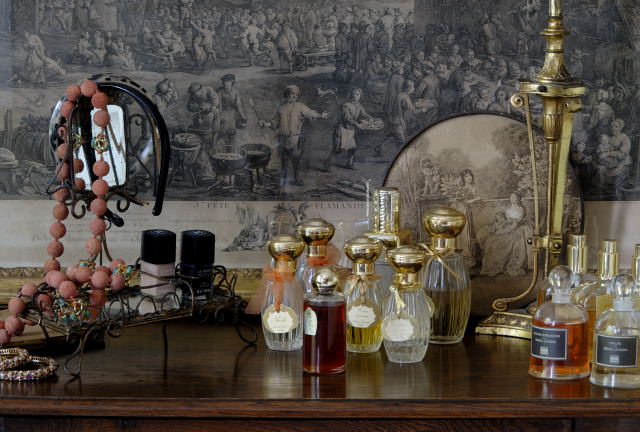 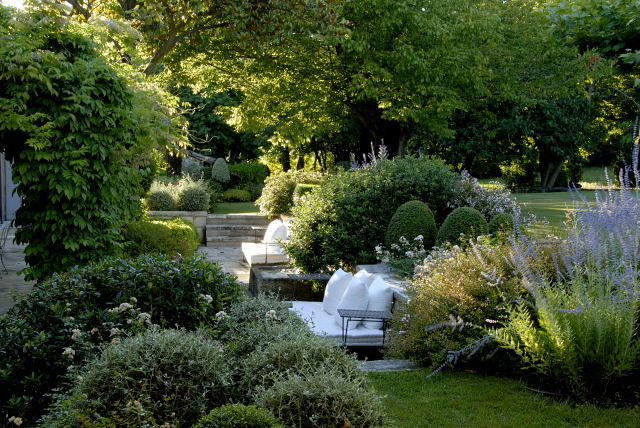 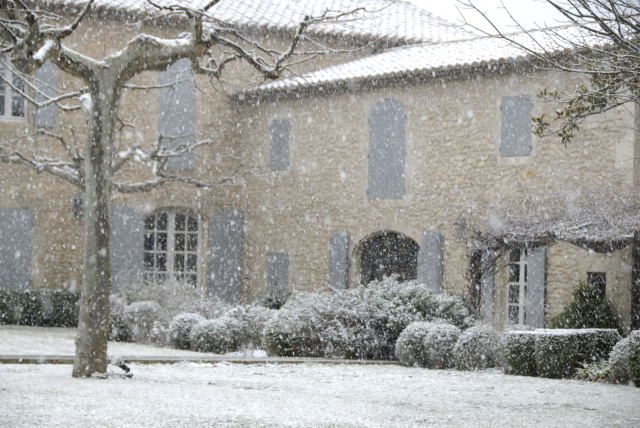 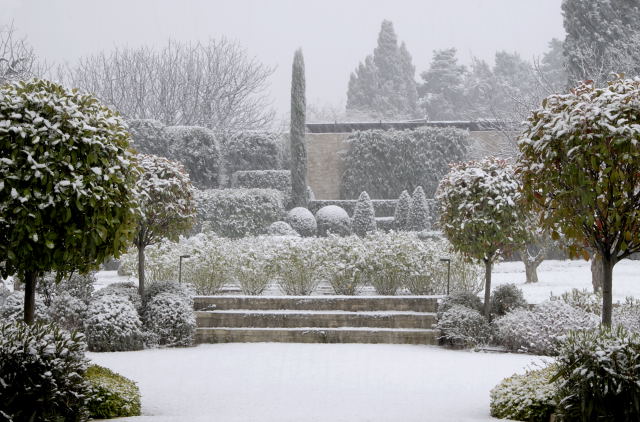 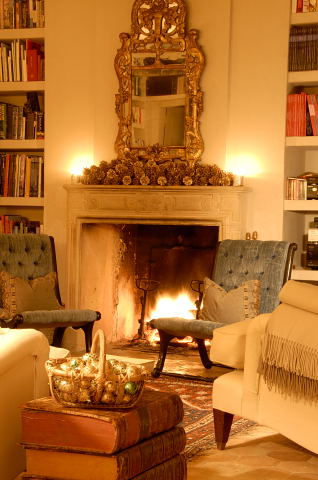 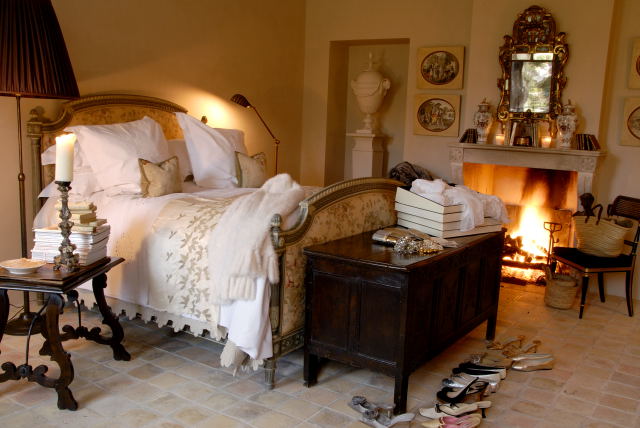 We chatted about this leopard staircase Vicki spotted (pun intended) in a shop. We did finally determine this is papered, not painted. 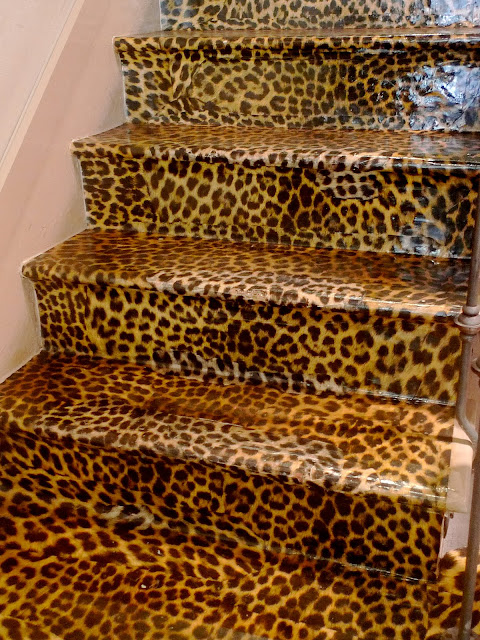 Vicki's daughter's bedroom as shot for French Essence. Vicki found the bed at the Cligancourt Flea market in Paris in 1995. 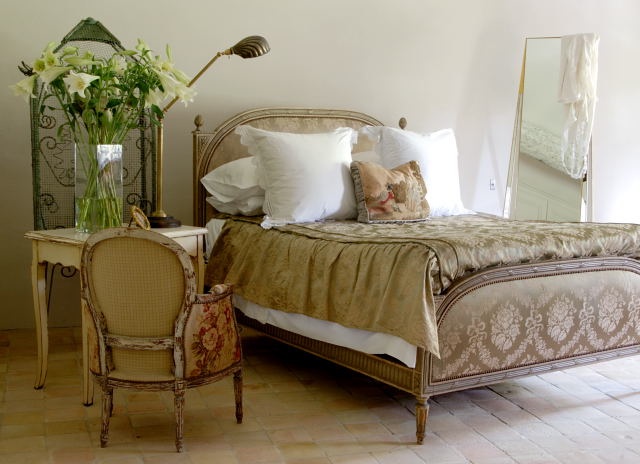 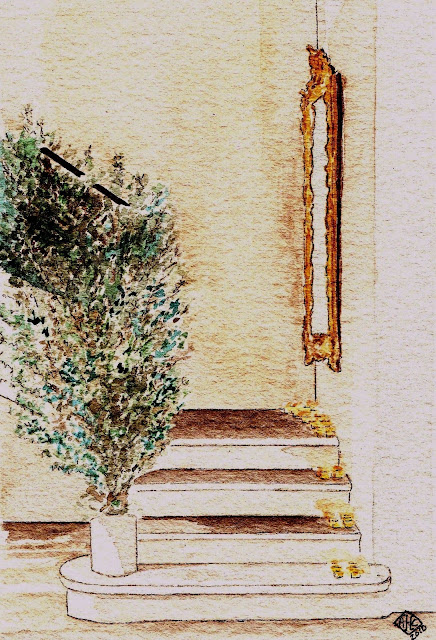 All photos, except where noted, by Carla Coulson.

Splendid Sass said…
Linda,
I received Vicki's book, French Essence, today, and it is absolutely gorgeous, stunning, outrageously beautiful. You get my point.
Vicki is such a dear person, and I can't wait to make it through the book again, this time slowly, page by page.
Thank you for sharing this interview.
Have a wonderful week.
Teresa
xoxo
December 20, 2010 at 2:37 PM

French Basketeer.com said…
French Essence is under my tree this year, and I can't wait to open it~ such a gracious interview...I can't imagine the travaux of several years to be able to live at the Mas, but of course with a few peeks it looks so worth it....BTW per your Qs re a dig, most property sales in France include a clause, if you dig up anything historically significant on your poperty, you are obliged to return it to the French State.
December 21, 2010 at 10:08 PM

mama c said…
I just received the book for Christmas (early!) and love I love it dearly. We decided to paint our shops accent wall that wonderful turquoise color for our annual French market in Feb.
I also just found your blog! I'll be back.

Virginia said…
How grand to find your blog through Vicki. I"m been a devotee of hers for a long time. I will add your blog to my list of recommended ones on my Paris photoblog. I'lll be back. Can't wait to see more.

Rebecca Grace said…
Okay, that's one more book for my Amazon Wish List for sure! Those photos, especially the summer garden, the snowy garden, and the roaring fireplace, gave me such an acute longing for France. *SIGH!*
December 22, 2010 at 9:57 AM

Visual Vamp said…
I love you girls, and Vicki is very special to me, but would you consider doing shorter shows? A half hour TV show is really only 22 minutes. Who has 45 minutes to sit and listen anymore?
Merry Christmas SRT.
xo xo
December 22, 2010 at 1:03 PM

Josephine Tale Peddler said…
I love Vicki's books and she is the epitome of style, beauty and has the loveliest manners in all of Blog land. Thanks for this lovely post on a special lady. xx
December 22, 2010 at 5:12 PM

Kimberlee Jaynes said…
Hello Ladies!
I listened to your interview and read your blog about Vicki Archer today...I have been a BIG fan of hers for years ...but your blog inspired me to finally purchase her books! A big thank you!

Another addition to the list of books for my design library must haves. Great interview goes well with tea on a rainy day like today.

Natasha @ Northern Light Design said…
Thank you for sharing, so great to hear this interview! I have been following French Essence for a while, and read both of Vicki's books... They are the BEST, and now this interview. So fun to hear the voice behind the books and the blog!

annechovie said…
Thank you ladies for this terrific interview with one of my favorite people. Vicki is truly one of the most gracious and lovely talents out there - she is always a joy to work with and is a gem in the blog world. Thank you for posting my painting of her staircase - you guys are the best! Merry Christmas. xo
December 23, 2010 at 10:48 AM

catherine shields said…
Thanks, Roundtable girls, for another wonderful interview. I am an Aussie too and I remember seeing Vicki's first book when it came out and thinking "is this real, it's so fabulous!"
Catherine
December 23, 2010 at 11:35 AM

sharon santoni at my french country home said…
I can't believe I've never been over to visit you three amazing ladies before. I had heard about TSR, but somehow kept getting side tracked. But now, thanks to your interview with Vicki I finally got here and I know I'll be back for alot more!!
Loved Vicki's interview, I am lucky enough to have her book and I adore it. I met her in Paris last fall and she is totally charming, I'm sure her book will be a huge success.
Merry Christmas to you all
Sharon
My French Country Home
December 23, 2010 at 1:20 PM

FrenchGardenHouse said…
ack! I'm saving this to listen to as a treat by the fireplace. I had the pleasure of interviewing Vicki via email recently, I can't wait to hear her interview in sound. :)

shiree segerstrom said…
My goodness, what a lovely garden! Thank you for the fantastic post. Shiree'
December 28, 2010 at 5:21 PM

Fay said…
Hi Linda ive just received french essence for a gift what joy
i will enjoy following this other blog of your stoo Happy new year fay xx
December 30, 2010 at 4:07 AM

Pigtown*Design said…
LOVED the interview! I love the long ones, because i set them to go and then get on with some work and just listen away!
December 30, 2010 at 7:19 AM

Susan (Between Naps On The Porch.net) said…
I second loving the long interviews. I come back often and play all the old ones whenever I'm working on other tasks on my computer. I always learn something new and hear something missed the first time around. Hope you keep doing the longer interviews...looking forward to hearing Haskell Harris since I subscribe to Garden and Gun and love it! Happy New Year! Looking forward to another great year of TSR!
Susan
January 2, 2011 at 11:41 AM

Joyce MacFarlane said…
I discovered Vicki's books at my friend Moe's house. They were great friends when Moe and her family lived in Sydney for a few years. It sounds like Vicki has a dream life and the talent to make the most of it. I really enjoyed this podcast. Thanks.
January 3, 2011 at 8:04 AM

Anonymous said…
Hey Linda ... moving a few times to different states within the USA is the equivalent of moving to another country in Europe. The only similarity is that we speak the same language but the culture within each state is quite different.
January 3, 2011 at 9:06 PM

Anonymous said…
That's it -- I am ordering her book. Amazing woman and such an amazing life.

And please don't change a thing on SRT. In this day and age of information overload, this reader at least LOVES being to settle in and really hear about someone's POV and y'all ask the best questions.

Sissy said…
Finally sitting down to listen to this wonderful talk with Vicki Archer. Her blog and her books are a gift to the senses!
I always love hearing the interesting people y'all have on the SRT, but there is one thing that irritates me. Joni, I adore your blog; your writing is always a joy to read. But PLEASE, stop interrupting others on the SRT, saying "sorry", then proceed to keep talking. I was taught that good manners was to apologize and let the other person talk, and then take your turn. Thanks.
January 7, 2011 at 2:41 PM

La Petite Gallery said…
Love Anne Harwells art. Hope to keep in touch with you and your Blog I lost it. Happy Mothers Day yvonne
May 7, 2015 at 4:29 AM